Presumed extinct in 1936. It had a remarkable resemblance, particularly in the head and forequarters, to a wild dog. However, examination of the skull shows that the space occupied by the brain was considerably smaller than in a dog – a fact which may help to explain the demise of the Thylacine on mainland Australia after the arrival of the Dingo, around about 5000 years ago.

Fact: On 7 September 1936, the last known Tasmanian tiger died at the Hobart Zoo. The accepted story is that the day-shift keeper forgot to lock the thylacine up in its hut one night and it died of exposure. 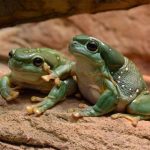 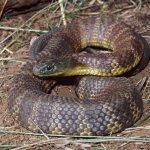