Tiger snakes are the most common cause of snakebite in Australia. They are dependant on water so they are most often found close by water. The venom from a single bite can kill 80,000 mice. The total length can be up to 2.9 metres.

Fact: Tiger snake is one of Australia’s most medically significantly species that historically has caused the most deaths and bites second only to the Brown Snake. 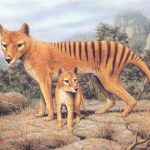