Locailty: Southeastern part of the United States, from the Carolinas, down to Florida and over to Texas.

The American alligator is the largest reptile in North America. The alligator uses its powerful tail to move itself through water. The tail accounts for half the alligator’s length. While they move very quickly in water, they are generally slow moving on land. They can, however, move quickly for short distances. Alligators live in freshwater environments, such as ponds, marshes, wetlands, rivers, and swamps, as well as brackish environments. Large male alligators are solitary, territorial animals. The larger males and females will defend prime territory. Smaller alligators can often be found in large numbers in close proximity to each other, because smaller alligators have a higher tolerance of other alligators within a similar size class.

Fact: Did you know in breeding season alligators can vibrate their bodies so fast that the water dances on their back. 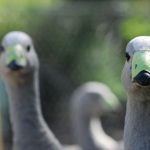