Locailty: Found on Kangaroo Island off the Coast of South Australia in Spencer Gulf. 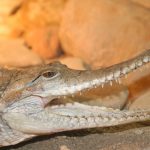