The wombat is a large marsupial weighing around 22-39kg. They are mainly nocturnal and sleep in burrows dug in slopes above creeks and gullies up to 20m long, often with many entrances. Wombats can live up to 15 years in the wild and the oldest Wombat recorded in captivity was 34 years old. Here at the Park we had Patrick the Wombat who turned 31 years old in 2016 but sadly passed away prior to his 32nd Birthday in 2017.

Coco who is pictured in the top corner was hand raised by Julia and she has had nine joeys here at the Park. This is a great achievement as it is hard to breed Wombats in captivity.

Fact: A wombat can run up to 40km per hour and cover 100 metres in ten seconds.

Sponsor: Wendouree ELC is a species sponsor for our Common Wombats 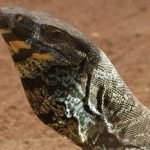